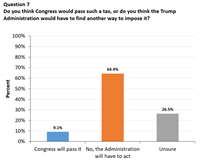 We also revealed how respondents, when asked if they thought a fee would prompt their company, or their customers to increase U.S. drilling, there was less certainty: 33.3% said Yes; 31.1% No; and 35.6% unsure. Among operators, the percentages were very similar. 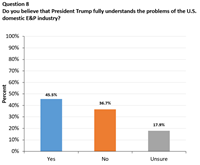 Who will implement a U.S. import fee? On survey question 7, we as respondents whether it would be Congress or the Trump administration that would actually put an import fee into effect. Not surprisingly, it was fairly clear-cut in the overall group of operators, equipment/service firms, drilling/workover contractors, engineering firms and consultants: Congress, 9.1%; Administration, 64.5%; Unsure, 26.4%. Among just operators, it was: Congress, 8.5%; Administration, 66.4%; Unsure, 25.1%.

Does Trump understand upstream industry problems? Just to round out attitudes and perceptions, we asked respondents whether President Trump “fully understands the problems of the U.S. domestic E&P industry.”

So, in summation, while a near majority of U.S. professionals believes that an import fee could stabilize and perhaps improve domestic drilling as a whole, there is less certainty when the question is applied to their own individual companies and/or customers. Some of this may be due to great uncertainty being caused by operators continuing to revise and slash capital budgets, plus the lack of any certainty as to when the U.S. economy will begin to recover from the Coronavirus.

WorId Oil will release remaining results from this survey on its website tomorrow, March 26, which will cover potential responsiveness and attitudes of the Trump Administration and Congress on an import fee.

Learn More
See Platforms
See Accounts
See Spreads
See Methods
Take Me To Broker Compare Brokers Side by Side Read Full Review
This website uses cookies to improve your experience. We'll hope you're ok with this, but you can opt-out if you wish.OK with me Reject Read More
Privacy & Cookies Policy

Any cookies that may not be particularly necessary for the website to function and is used specifically to collect user personal data via analytics, ads, other embedded contents are termed as non-necessary cookies. It is mandatory to procure user consent prior to running these cookies on your website.